This week the 2nd conference was held in Nice, France. The topic: the art, science, and engineering of programming.

It was my first brush with the world of serious academic computer scientists. I don’t have a degree myself, though I did study CS for a couple of years at USF before deciding work was more fun and interesting and lucrative. I was by far the least qualified person at the conference; most were Ph.D students or professors or postdocs. They all came from a world whose details I was hazy on, at best. It turned out that my world, the world of “industry” as they term it, also is something of a faraway land to them.

Throughout the workshops and presentations I was struck by a few things: how well-read and smart and knowledgable the participants were, the fun abstract and interesting nature of the problems they were solving, and the complete lack and regard of any (at least to me) practical applications of their work and research.

Partly due to being in an unfamiliar realm out of my depth on many topics, and maybe partly with a little bit of jealousy of the intellectual playground they get to spend their days in, I tried to keep an open mind about the talks and learn what I could. I did really want to know if there were applications of the problems they were solving outside the world of academic research into solving problems of other academic researchers, but I felt like it’d be improper to inquire. Let me give some concrete examples.

Researchers at Samsung built a prototype for sending code to be executed on other devices and making use of their resources. One demo was showing a game being played on a phone, and then having the game display seamlessly transfer to another device (that could be a smart TV, in theory). Pretty neat!

Well for one, this was for Tizen, an operating system that exists purely as a bargaining chip for Samsung and a backup strategy to not be solely dependent on Android. So there is no real-world application for this to run on any real devices. Furthermore, giving other devices the ability to make use of Tizen device resources is a huge avenue for security problems, as the presenter readily acknowledged. When combined with the fact that Tizen has more holes than swiss cheese this is doubly worrying. Additionally, one of the major unsolved huge problems with IoT (besides security) is interoperability between devices of different manufacturers. When I asked if there was any interest or plan to submit their work to a standards track, the presenter and host of the session got very confused.

Another talk was a study of running safe C/C++/Fortran code. It included implementations to provide safety of memory management, bounds checking, variadic arguments length checking, use-after-free, and double-free errors. Awesome! Fantastic! Just one catch – it’s only for running said code on the JVM. Since people don’t usually run C++ code on the JVM, this is of limited use, except possibly for tooling for people running Ruby on the JVM, one attendee told me. The talk and the paper had nothing to say on the performance overhead. Research was sponsored by Oracle Labs.

Actually, a vast amount of the research topics were relating to Java and the JVM, a situation I found scandalous. I had hoped and even assumed that academics would be proponents of Free Software, because of the massive contributions to learning, understanding, and implementation, while being unencumbered by profit-driven abuses of the legal system to the determent of progress. And yet they all live and breathe Java! Java is of course NOT free (not as in free beer, but as in libre – a French word meaning “Richard Stallman”), as was recently affirmed by a US district court which found Google liable for potentially 8 or 9 billion dollars for writing header files mimicking an interface of Java. Java is probably the least free language out there now.

In the first workshop I went to there was a session where we would all get to play with a new attribute-based grammar to compose a basic C language parser. Cool! But it was all done in Java. I said “sorry, I don’t have a JDK” and the entire room burst out laughing. “Who the fuck uses JAVA?” I asked, incredulous. “Uh, everybody!” came the smart-ass reply. Since there was no functioning internet at the conference venue, I couldn’t download the JDK, so I left. What a sad state of affairs for academia, to be so beholden to the most evil corporation in software today.

Research was presented on improving the efficiency of parsing ambiguities resulting from deep priority conflicts. An interesting and thoughtful study of helping compilers do a better job of catching a certain type of ambiguity and resolving it in an optimal fashion. They applied their analysis to 10,000 Java files on GitHub and 3,000 OCaml files, and found three conflicts in two Java files, but a great many in the OCaml source files.

So for all the folks out there doing serious work with OCaml, you’re in luck!

My favorite talk and the winner of an award at the conference was simply about Lisp, Jazz, and Aikido. And how they’re all cool and similar.

Another enjoyable and award-winning talk was about how academics talk about Monads. Whether they are railroad tracks, boxes, or sometimes burritos. 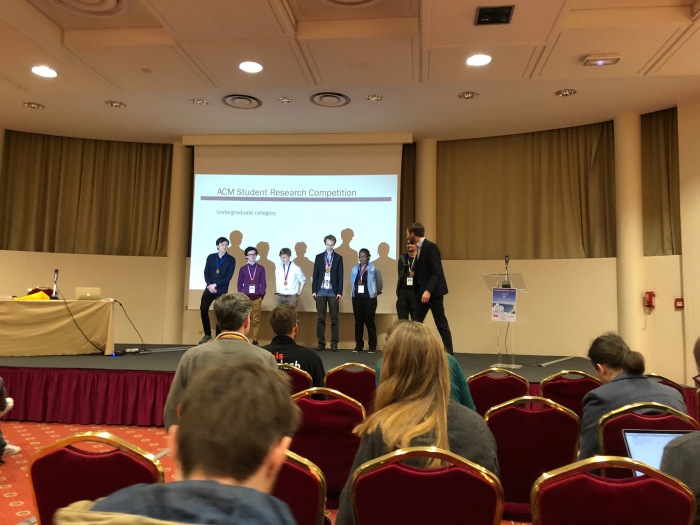 One of the student research projects sounded at first like it might be getting dangerously close to some sort of potentially useful application one day. One student talked about his system for dynamic access control for database applications. Unfortunately it requires using a contract language of his own devising in a lisp-lisp environment.

Don’t get me wrong, I enjoyed the conference and was frankly intimidated by all the super smart folks there. But it left me with a feel that so much talent, brains and time was being spent solving problems purely for the benefit and respect of other academics, instead of trying to solve serious problems facing us vulgārēs who have deadlines and business objectives and real-world problems to solve. The best part of the conference by far was just talking to the people there. I had a lot of interesting and thoughtful conversations. The research, eh.