Attorney General Jeff Sessions believes we aren’t tough enough on drugs, and we need to lock people up longer to reduce crimes related to drugs. It’s an interesting theory, one that we’ve implemented at a policy level for quite a few decades. It seems that rarely do politicians or journalists ask the simple question: has it worked so far?

We’ve been issuing longer and longer jail and prison sentences for drug-related crimes, especially notably for the Schedule I “Devil’s Lettuce” scourge of violent hemp addicts inflicting untold misery on the population.

One could point out some flaws in the logic behind the theory that locking people up is good for society, reduces violence and drug usage, and is a deterrent to would-be tokers and dealers. Putting people behind bars with often violent criminals for years probably doesn’t make them better people. Keeping them away from their children probably doesn’t improve society. Incarcerating them probably isn’t great from a fiscal standpoint. Proscribing personal usage of certain drugs on a demonstrably arbitrary and non-medical, non-biological, non-psychological basis really seems to violate the reasonable concept of not prosecuting victimless crimes. The fact that addiction has been shown to be a disease, greatly predicted by genes in fact, and not a moral failing. The logic behind the idea that drugs can ruin lives, therefore we should lock them up with criminals in a cage for years away from their families, give them felony charges, and make it incredibly difficult to find gainful employment afterwards doesn’t seem to be a great life-enhancer either. The fact that ethanol alcohol, an incredibly toxic, dangerous, addictive, inhibition-destroying, violence-inducting drug and poison to all living tissue is readily available on most blocks in the country for unlimited purchase while marjiuana is classified as Schedule I, unavailable for research purposes without an extremely cumbersome DEA license, legislated as having no conceivable medical usage, and worthy of felony charges. By the federal government of course, not in the many states which currently permit medical and recreational usage.

One could go on at length about the contradictions in logic of this drug enforcement policy theory. It doesn’t seem to convince some people. After all it’s a complex topic, there are many very different kinds of drugs, behaviours, societal normals, scare campaigns and wildly-differing personal experiences. I don’t expect this matter to be settled by pure reasoning alone. Nor is it necessary to discuss this in the abstract.

What are the goals of the drug war? Ostensibly it’s to reduce overdoses, addiction, usage, drive up drug prices, reduce availability and deter usage and related criminal activity. Reasonable goals, I think most would agree.

Or as one of the top aids to Nixon, who launched the drug prohibition campaign, describes the policy:

“You understand what I’m saying? We knew we couldn’t make it illegal to be either against the war or black, but by getting the public to associate the hippies with marijuana and blacks with heroin. And then criminalizing both heavily, we could disrupt those communities,” Ehrlichman said. “We could arrest their leaders. raid their homes, break up their meetings, and vilify them night after night on the evening news. Did we know we were lying about the drugs? Of course we did.”

Did you fall for this campaign perhaps? Well you’re an idiot. But ignoring your simple gullibility, let’s forget about this interview and focus on the laudable goals mentioned previously. Reducing demand, access, affordability and overdoses.

Opioids—prescription and illicit—are the main driver of drug overdose deaths. Opioids were involved in 33,091 deaths in 2015, and opioid overdoses have quadrupled since 1999.

– US Center For Disease Control (CDC)

Okay, more people are dying from drugs, particularly opiates. So maybe we aren’t reducing overdoses. How about prices and purity?

Prices for hard drugs have fallen greatly since 1981, purity has risen. Source: Executive Office of the President, Office of National Drug Control Policy.

If you do any research you can easily see that overall demand for drugs has remained constant. People who want to do drugs will do them. All of the trillions of dollars spent on incarceration, interdiction, prosecution over fifty years have had little discernible impact on demand. Meanwhile fatal overdoses have greatly increased, hard narcotics prices have dropped dramatically. All kinds of drugs are trivially easy to obtain (according to my cool friends). Mexico is a failed state, run by narco-terrorists, and many cities are beset by gang violence for the simple reason that drugs are in great demand and quite illegal. Millions of lives have been ruined by the government in pursuit of getting people to not ruin their lives with drugs. So at what point does one look at the current policy and decide maybe it isn’t working out like the theory predicts? What’s the threshold for admitting maybe the last five decades of locking people up isn’t having the desired result?

Wikipedia: In October 2013, the incarceration rate of the United States of America was the highest in the world, at 716 per 100,000 of the national population. While the United States represents about 4.4 percent of the world’s population, it houses around 22 percent of the world’s prisoners.[1] Corrections (which includes prisons, jails, probation, and parole) cost around $74 billion in 2007 according to the U.S. Bureau of Justice Statistics.[2][3] 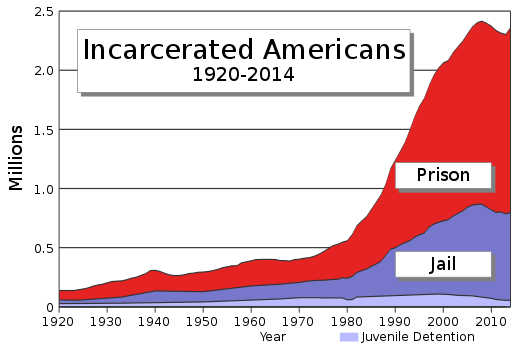 On what basis are we evaluating the effectiveness of this policy, if not based on medicine, price and availability, overdoses, demand, enriching of narco-terrorists and violent gangs, lives ruined, money wasted, or principles of justice?

One thought on “Drug War, Still Going For Some Reason”