I just went on a vacation to Eastern Europe, one of my most favorite places on earth. Specifically Poland and Ukraine.

Wrocław, Poland is a fantastic city that almost nobody in the USA has ever heard of or even knows how to pronounce (“vraswav”). It is the fourth largest city in Poland and has a number of excellent universities. I’ve had the pleasure of working with a number of software engineers there and they are exceptionally sharp and reliable, and very friendly as well. Since the government gives everyone free schooling through five-year university the population in general is very educated and speaks better english than most outsourcing destinations.

As a result of recent history Wrocław is a pleasing mixture of east and west Europe, having been part of both the third reich and the USSR. Many of the shops and streets resemble Paris or Germany but there are also plenty of communist-style Soviet housing complexes and a definite slavonic ring to the language. As far as the economy goes, Poland is definitely one of the brightest success stories in Europe, being the only eurozone economy that did not fall into recession after 2008’s crash, having a highly educated population of english speakers and engineers, and a close trade relationship with Germany. And since they are not using the Euro it’s cheap for Americans to hire poles (and vacation there).

Warsaw is pretty chill too. Its buildings are much more modern as the entire city was flattened by Nazi bombs.

After a short tour though Warsaw it was time to head to Kiev, the capital of Ukraine. When we got there it was hot, muggy, draped in total fog and our taxi driver had a giant crack in the windshield of his Lada.

We weren’t really sure what to expect in Ukraine. According to the news in America and the advice of random uninformed friends it sounded like we might be headed into a war zone or collapsing post-Soviet radioactive wasteland. All utter nonsense.

First we checked in to our apartment.

And then off we went to „Club Decadence” disco.

The club was like many others we encountered on our trip later – face kontrol (to keep out ugly / poorly dressed people), expensive drinks to buy for women, ear-splittingly loud generic dance techno and hookahs. Interesting things about the menu were that it had cigarettes for about a quarter and also had “bodyguard” for about $30. We did not get the bodyguard but probably could have used one later in the night when my companion ended up arguing with five gypsies at 0400 on the street in downtown Kiev in a suit. After causing a massive scene in the grocery store attempting to purchase foodstuffs and booze over the course of about an hour with numerous gypsies hounding him we managed to escape back to our apartment, but only barely. Maybe they just didn’t know what to make of a six-and-a-half foot Norwegian man in a suit stumbling around in the middle of the night but I think they just couldn’t figure out how to successfully rob him. I think in most major cities in the world we would have ended up imprisoned or found ourselves awaking in a bathtub filled with ice missing kidneys. We escaped without incident though, hooray for Kiev. My companion passed out at around 7am, leaving us a small wooden club with a piece of paper wrapped around it instructing us to wake him with it if necessary.

Our apartment was in the most central location possible in all of Ukraine: across the street from the Maidan Nezalezhnosti (Independence Square) where basically all of the political protest shit went down recently.

In almost all of our travels there was little sign of any serious trouble in the country. The only thing we really saw that gave some indication that things were not status quo was the Maidan, where there were signs of military action, the occasional aggrieved person with a megaphone shouting stuff at a crowd of a half dozen curious onlookers, and a row of photographs and flowers for dead Ukrainian soldiers.

Mostly it was happy tourists and costumed things trying to get money to be in photographs with people.

There was plenty to see in Kiev. Just taking the metro was an adventure. Like the Moscow metro the stations were hundreds of feet underground. You know, in case of a nuclear attack. The trains came every few minutes and were really quite fast and efficient. The system really puts any bay area public transit to shame, which is sort of depressing.

I don’t come across too many mentions of world war II in my daily life here in San Francisco but in eastern Europe it is definitely a Thing that Happened Recently.

Kiev is one of the “hero cities,” an honor that I think was bestowed on cities that did a good job of killing nazis. They all have monuments to the other Soviet hero cities.

Here are some WWII armaments:

The Katyusha rocket truck is a big deal, there is reverence for it including a famous song.

Also we saw some cool churches and stuff. 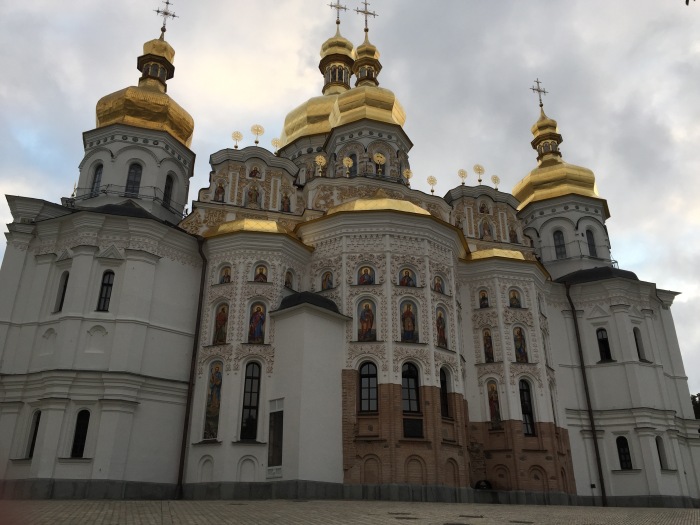 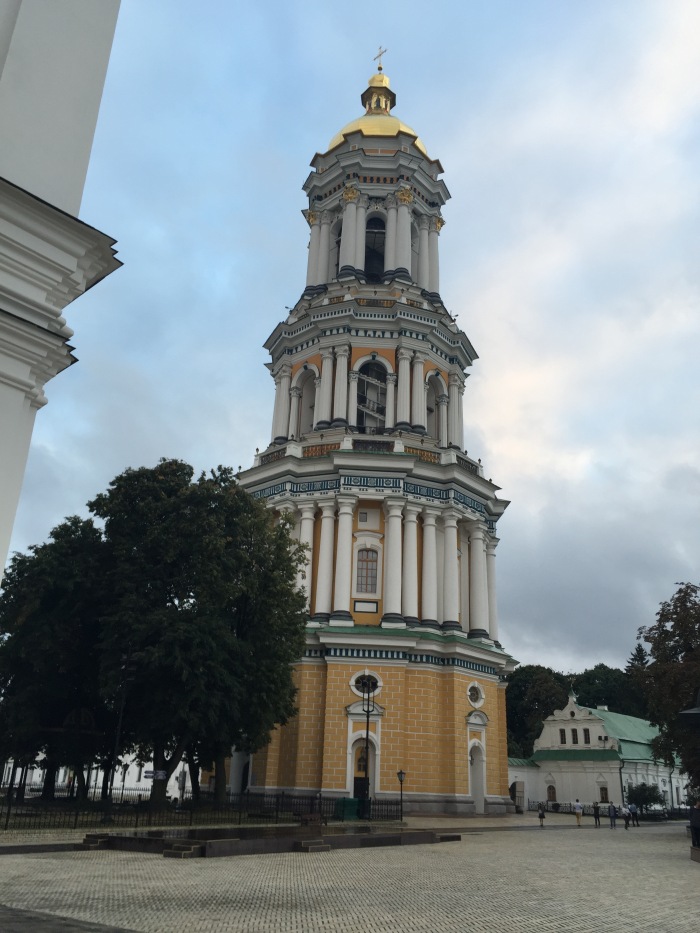 After more disco and drinking and sight seeing it was time to pack our bags and say goodbye to Kiev, and get some obligatory tourist photos.

Odessa is a nice resort sort of town. It has beaches and sort of a boardwalk and the weather is totally absolutely perfect. It’s on the Black Sea, which was surprisingly warm. Lots of people swam and jet skied in it.

Odessa was a bit of a strange place. The resort area where we were seemed like a fancy amusement park sort of place, with a water park, disco, lots of fancy theme restaurants, children’s rides, high-end clothing stores all in a big strip. It was sort of creepy though because it was almost entirely empty. This was a recurring theme: nice shops and restaurants, but nobody buying anything. I don’t know if this is the normal state of the Ukrainian economy but I doubt it.

Saw a lot of this.

Downtown Odessa had some nifty old buildings. There was a statue to Catherine The Great who officially created the city. She also gave my ancestors a land grant for being German to come farm winter wheat near Odessa. Many years later some goons of Stalin came and shot my great grandfather who tried to defend it. So these things go I guess.

Parts of Odessa were pretty grimy too. One of our party members said last visit he got chased by a pack of rabid dogs, which just kinda wander around. Fortunately we did not have any random encounters of that nature.

After a couple days of rest enjoying the sun and sea we were off to the final leg of our adventure, Lviv.

Lviv is where the real action began. This city is so densely packed with awesomesauce that I advise everyone to stay away to leave more awesomeness for us. Two adventurers in our party had spent time here before and knew where to go. Probably the best part of Lviv is the themed bars. There are numerous outrageous bars and restaurants that are just unlike anything I’ve ever been to in the U.S. or anywhere else for that matter.

There’s the House of Legends, a seven story bar staffed by midgets with a different theme on each level, like a lion tamer room (there was a group eating lunch inside a lion cage), or a cobblestone room with a seven-segment display showing the current number of rocks in the cobblestone roads and made up historical plaques next to rocks.

Another bar is a gas lamp bar with fake coal mine entrance. On the roof is a rickety Lada, cause why not.

At a famous bar (more on it in a bit) there’s a sign with masonic symbols pointing upstairs titled “The Most Expensive Galician Restaurant” but when you go upstairs there are just doors to flats. If you knock on one they let you into a small soviet-style apartment until you ask about the restaurant. Then they open a fake wall and let you in. All the prices on the menu are ten times the actual price but they charge you full price if you don’t act like you’re in the know.

There’s another restaurant that we didn’t get a chance to go to that is Jewish-themed. Apparently there are no prices on the menu, you have to haggle. The absolute craziest place though was definitely Kryjivka. To get in you knock on a door, and a man in a soldier uniform opens the door holding a machine gun and demands the password. You must tell him “Слава Українi” and then he pours you a shot of honey vodka. You drink it and go down into a bunker.

The place is УПА-themed, which means it’s basically dedicated to the glory of killing nazis and soviets I think. It’s nuts. In the backyard is some sort of satanic transformer.

And on the roof is some artillery.

So yeah. Check the place out next time you’re in Lviv.

Anyway the restaurants are awesome. I think one guy owns them all. He has a handy map:

There was plenty more in Lviv besides the highly entertaining restaurants. We checked out the armory, containing various normal item drops from Diablo II.

Oh yeah, and our hotel was reallly nice. I heard it was a present for some oligarch’s girlfriend. It was really posh as far as Ukraine goes. The elevator did not seem like it was about to plunge into the abyss at any moment. And the place was pretty empty. I think it was maybe $30/night.

One thing I definitely noticed about Lviv is that there was a lot more visible Ukrainian national pride there. It’s pretty far west whereas all the recent troubles have been in the far east of the country. There were Ukrainian flags everywhere, tons of nationalist trinkets for sale everywhere and of course Kryjivka.

All in all, two weeks well-spent. I got to see all kinds of great places and historical sights, everyone we met was very friendly and helpful, we could basically do anything we wanted at any hour and I was even able to get by sort of decently with my very poor Russian skills.

Our Norwegian companion loves the place so much his dream is to move there and become a citizen. I think he had more national pride than a lot of the actual Ukrainians. There’s definitely something about the place that has a strong appeal if you’re sick of the politically correct, expensive western world and want to bust out of the liberal fantasy bubble that envelopes places like San Francisco and Oslo. For a little bit anyway. Maybe not for too long.